In praise of Hashim Amla 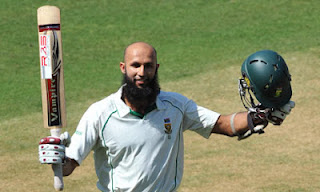 It's easier for batsman than fast bowlers to achieve a certain kind of legendary status. This status is hard to define, but you know the one I mean. It's the kind of reputation that seeps beyond our mere appraisal of the cricketer, and into our appraisal of the man.

Above all, of course, it's about ability. But there's so much beyond that; a wealth of attributes that make a player a "great". Did our athlete play in the right spirit? Did he show respect for his opponents, and for the spirit of the game? And: the indefinable. Was there something over and above the very good - a degree of artistry, a hint of magic? Often, it seems, this goes hand-in-hand with something else, something our cricketing tribe is blessed with - thoughtfulness. Political engagement. We're fortunate to have players intelligent enough to write and speak in such a way that they can calmly place their achievements in a broader, socio-political context. Men like Rahul Dravid and Mahela Jayawardene.

It's not that bowlers can't meet these criteria. Has there ever been a cricketer more attuned to the spirit of the game than Courtney Walsh, the man for whom sledging consisted of a tongue-in-cheek glare, who worked tirelessly for charities after retirement? For artistry, how many batsmen can hold a candle to the intricate coordination that afforded Richard Hadlee or Malcolm Marshall such supreme control of accuracy and movement, along with their searing pace - the product of 'mere' athleticism?

But it's easier for batsmen to take this kind of place in our affections; for them to quickly be seen as great men, as well as great cricketers. Perhaps it's because theirs is a reactive art. Fast bowlers start it. They must. They try to hurt people, sledge people, tamper with balls. For a great bowler, supreme fitness is the starting point; for a great batsman, it's almost an optional extra. Skill is the very first attribute we consider when thinking of a batsman - for a fast bowler it's likely to be speed.

And from skill, there's an unconscious connection we tend to make to the intellect. I've named Dravid and Jayawardene. I can quickly add Constantine and Sangakkara to the mix. Perhaps Gower too.

There are many greats we view differently - Kallis, Ponting, S.Waugh - great batsmen for whom we readily use the word "skill", but more rarely the word "artistry". One could crudely claim these are less sophisticated men than the first group, and perhaps draw some sort of correlation between the art of batting and living. But I won't, because for every example there's a counter example, and nor would I pretend to have a window into any of these men's souls. To further muddle things you have the second tier - the roundhead cricketers and talented writers - the Ed Cowans, the Athertons - players about whom there's a suspicion that intellect augmented a lesser talent (deeply relative use of the word 'lesser', I stress).

So it's better to say this: there has long been a breed of batsman, venerated by the fans, whose class (how often we deploy that noun in these cases) seems to extend off the field.

All of which brings me to Hashim Amla's Twitter feed. I saw he was on Twitter, and decided to have a look. I rarely bother following cricketers, or indeed any sportsmen, if I can help it. But I had a feeling Mr Amla might be different. What's the first thing I see staring back at me? Why, a charming Mark Twain quote. And what do I see next? Well, this. Yup. He's one of those.

So let's talk, then, about the batting. And let's start with two minutes of wonderful analysis by Nasser Hussain.

Good job Nasser: less to type. But I'd just like to add a little bit to his analysis. He's spot on about the timing of the bat 'twirl' before Amla hits the ball. What we can see is that it comes from a pick-up which originally had the bat pointing to second slip. You can see how that might have caused problems with LBWs.

But what I find interesting about the twirl - also, for that matter, about the fact that his is a technique built not for hitting sixes - in fact it's not for hitting the ball at all, but rather timing it - is that I only know of one other batsman renowned for such a tic. Allow me:


And from this excellent Wikipedia article:

"In his 2003 book Bradman Revisted, Tony Shillinglaw utilised a biomechanical analysis of Bradman conducted by Liverpool John Moores University in England. Shillinglaw concluded that Bradman’s initially perceived weakness was actually the key reason for his success – it created a "rotary" action in his swing of the bat that delivered extra power and ensured that he kept the ball along the ground..This was summarised as follows:


...he levered the bat up by pushing down with the top hand, whilst using the bottom hand as a fulcrum. As it neared the top of the back-lift, Bradman manoeuvred the bat through a continuous arc and back towards the plane of the ball during the downswing in preparation for impact.

Additionally, his backswing (according to former Australian captain Greg Chappell) kept his hands in close to his body, leaving him perfectly balanced and able to change his stroke mid-swing, if he was initially deceived by the flight of the ball."

So if you're wondering why Amla's so good - well, it's because he bats like the best. Like the Don, he's an accumulator. Like the Don, not necessarily a beautiful batsman to watch until you really start to pay attention to the good stuff - the minute adjustments to flight or movement, the tiny, last micro-second alterations to a stroke that allow him to pick a gap. He's a batsman to watch on a cold Thursday morning at Lord's with a coffee in your hand and a quiet, contemplative crowd. Not one to watch, as I did, in front of a boozy Oval mob on a Friday evening. This is my favourite Amla video on YouTube, if you've six minutes spare. That shot at 1.08 - it's not a thick edge, it's a last-minute opening of the face. Note, also, how late he plays the swinging ball at 3.46.

But let's get back to the man. The Twitter feed, of course, tells us much about him, doesn't it. Those of us with Muslim friends or a knowledge of Islam have, for the last decade or so, despaired at the overwhelming media emphasis given to various empty vessels here and around the world, many of whom could barely be described as Muslims at all. It's not a version of Islam we recognise. Not the shouting and screaming. What we recognise is a religion that stresses humility, modesty - above all the importance of a batting necessity: patience. In Islam, it's called Sabr.

Amla's batting is, of course, a model of this. He started his career, and word got round he couldn't play the bouncer. So the first class bowlers bumped the shit out of him. He just parried them, and waited. Sabr. He's a man who many muttered was only in the SA team due to quotas,. They'd soon see. Sabr. He's a man who couldn't even bring himself to score at over four an over against Holland. But what are you going to do? They bowled well that day. Sabr.

And of course, he's a man who was described as a "terrorist" by Dean Jones, on air.

Amla: "The teaching of Islam has always been that if somebody apologises, you forgive them. And this is the basis of Islam."

McRae: "I think the way you handled it with diplomacy and dignity was perfect, but inwardly it must have hurt a little bit."

Amla: "When somebody calls you something it's never nice... but if a person's remorseful for something they did, then who's to judge except the Almighty?"

Then you read of the Indian community in Natal, of how it's rarely produced cricketers (Peter Roebuck says: "During the apartheid years the Indians tended to lie low. Shy by nature, resourceful by disposition, aware of their origins as indentured labour, they were caught in a racial no-man's land, and so concentrated on making money and gaining a good education"), and you wonder what the upshot of all this patience will be. Me, I seem to end up thinking about W.H. Auden’s sonnet on Edward Lear, which ends with the line, “And children swarmed to him like settlers. He became a land.”
Posted by The Crap Cricketer at 07:05